I always say that I was never the most talented netballer growing up, but I always tried to be the most hard working. I think that is something that has stuck with me and helped me maintain a career in the National League competition for 14 years now. The talent you are born with, the genetics you may have or the environment you grow up in, as a kid are all out of your control, but it is always your choice whether you decide to work hard and give it everything you’ve got.

Technically I was not ‘meant’ to be a netballer. Neither of my parents played any team sport at all growing up. My Mum was a dancer and my Dad always tells the story about how he broke his leg in his first game of rugby league as a 6yr old and that was the end of his footy career. I didn’t have a sister that played and my brothers preferred motor bike riding in the bush than footy or soccer.

I was asked to play in my friends team when I was 8yrs old as they needed an extra player and I was tall. As a kid, I remember just loving the game. I loved training, having fun with my friends and I especially loved playing. My parents were so supportive. They learnt the rules of netball, drove me to training every week and made friends with the other parents even though sport was outside of their comfort zone.

When I was about 14yrs old, I saw the World Championships on TV and remember watching Sharelle McMahon sink the winning goal of the Gold Medal Match. I got butterflies in my stomach and it was that moment I thought to myself, maybe one day that could be me.

I didn’t know much about the netball pathway but my local club coach had suggested thought I try out for the Representative team. You had to be in the A Grade to trial, and I only made my first A grade side when I was 14 so that was when I had my first trial. I have never been a fan of ‘Selection Day’. The nerves and pressure I put on myself to do well in that small window of opportunity never did me any favours.

I ended up making my first Rep team that year but only because one of the other girls got injured so I was called in as a replacement. We went to the State Age carnival where we played about 20 shortened games over 3 days. I had an absolute ball and realised I played a lot better when I didn’t know people were watching me. At the end of that carnival I was selected into a talent squad and invited to a training camp. Things were beginning to get a bit serious and I started to see the competitive side of netball where girls see you as competition and can sometimes not treat you very nice because of it.

I wasn’t sure what was meant to ‘come next’ in the netball pathway, but a few weeks after the camp I got a phone call from the NSW Institute of Sport Coach offering me a scholarship. It seems ridiculous now, but at the time I had no idea what NSWIS was! My school wasn’t very competitive in netball so I never played in any school competitions at any level so for me NSWIS became my lucky break and the opportunity I needed to be seen.

In order to make the next step and play in the NSW State Team I had to go to another Selection and I hated it! I had learnt to control my nerves a bit at this stage and I had a few friends at the trials but I still didn’t enjoy it. Despite that, I played well and was selected and go to Nationals. It was here that Julie Fitzgerald (the then Swifts Coach) saw me playing and offered me a contract to play for the Swifts as a 17yr old.

When I write this part of my journey it sounds like it kind of came easy. I just made one team after another but out of all those girls, only a small percentage of us got that next opportunity. There were days when I was ready to stop playing and just focus on my education but I was too stubborn to not give it a real crack. Throughout those years at NSWIS I was the kid that worked my butt off and wouldn’t stop trying. I truly believe that it was this quality that gave me my opportunity in the Swifts instead of my natural ability.

Throughout my career three things have proved themselves to be right time and time again:
1. Be the one with a good attitude and work ethic. No matter what team I have played with, I always try and work the hardest and focus on what is in my control. Your work ethic and commitment will attract just as much attention as natural ability.

2. Someone is always watching. Don’t stress too much about making certain teams, or if you miss out or what is the ‘perfect pathway’. If you try your best in whatever competition you are playing, people will talk and doors will open. Opportunities will come, you just have to be ready to take them.

3. You always play your best when your having fun!

I will delve into the rollercoaster ride that has been my career in later blogs, but for now I hope that this story can help your junior netballer find hope in their dreams. No two people have the same story, so be sure to own yours! 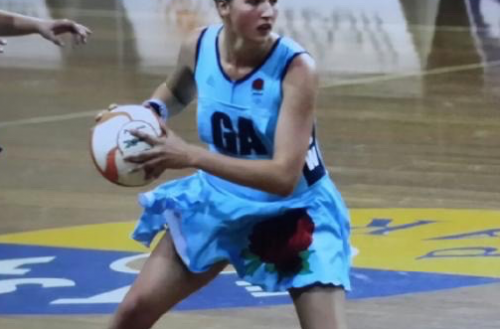 From one netballer to the next, I would love to hear from you! Whether it is in
regards to organizing a Netball Clinic for your club or school, or about Motivational
Speaking, Award Presentations or any other event- don’t be shy!